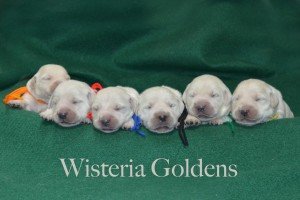 Towards the end of the second week our English Cream Golden puppies’ eyes are beginning to open. This is a gradual process and usually takes about 24 hours to completely open. By the end of the second week usually all the puppies eyes in the litter are open. Even though their eyes are open they still cannot see very well and care needs to be taken not make sudden movements to keep from startling the puppies.

Now that the puppies eyes are open, they are beginning to explore their surroundings. Their legs are very wobbly and keeping their balance is difficult, but each day they improve and get around a bit better.

By the end of the third week the puppies are starting to get teeth, which prompts them chewing, tugging, and pulling on their litter mates. They are not ready for solid food yet, which is usually introduced after they are four weeks of age.

Hearing also usually comes towards the end of the third week of age, beginning of the fourth week. We are careful not to have any loud noises occur until they have obtained their hearing.

We want to introduce sounds gradually. We usually start with switching between the radio and the TV at the beginning. We also have a CD that we play that has thunderstorms, airplanes, trash trucks, and babies crying that we play, while we are playing with them, so they associate these loud noises with positive interaction.

They are growing quickly and the next few weeks they are introduced to food, toys, and more social play.

Home for the Holidays

Home for the Holidays 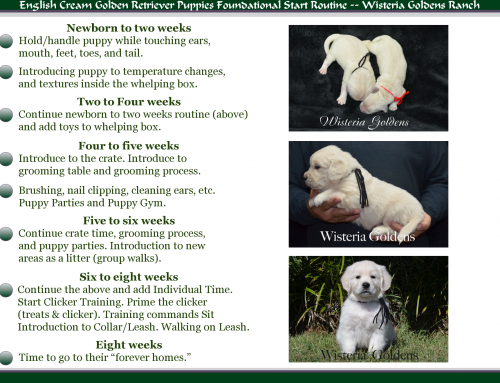 Early Neurological Stimulation and Rules of 7